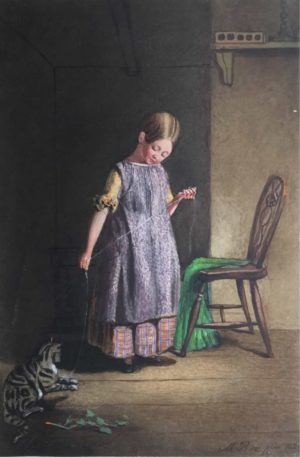 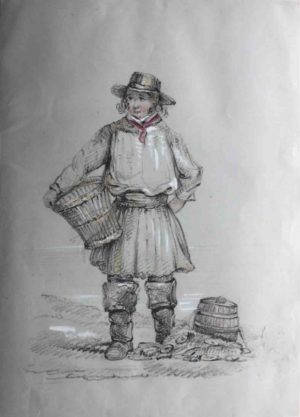 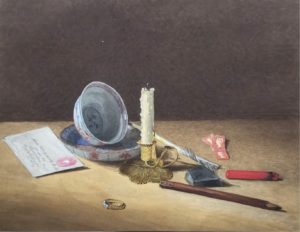 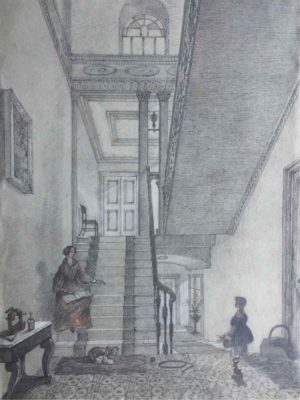 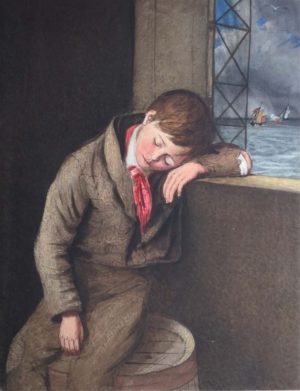 Album , large landscape format, bound in embossed and gilt lined half leather with cloth boards, worn, spine repaired. Marbled endpapers, circa 1840’s .Approx 52 cm x 36 cm x 2 cm .29 works, some large enough to be mounted one to a page, others smaller. The works are in a variety of media including pencil and crayon, pastels with added white ground highlighting, pencil with white ground highlighting, sepia wash, and fully worked watercolours/gouache. Some of the works initialled “M.P”, and one watercolour signed “M.Price pinx. 1842”. The works would seem to us to be largely the work of a woman or women, judging by subject matter and handling of the images. They are all accomplished, the finished watercolours very much so. There are a number of clues pointing towards an Irish provenance: One image has “Shanthill” ( apparently in Antrim) as a title, and another painting features an envelope with an Irish address ( possibly a made up name, but with “ Ireland” as the last line of the address”), another is titled “Bally Keene”, and another “The Road to Powerscourt”.
The Powerscourt Estate is in Enniskerry, and there are a few images of a large house which might depict it. Some of the images show coastal scenes featuring fishermen, another a bathing hut and a bathing woman, and there are several images of local peasantry. An image of a boy in a jacket with an elbow torn, seated by a window through which can be seen ships at sea might be an image suggesting the Irish diaspora, but generally the local people depicted seem rosy cheeked and well fed- as might be depicted by a well to do, well fed genteel lady artist. Conditions in Ireland at this time for the majority of the population were worsening, with the Great Famine [An Drochshaol,“The Bad Times” ] beginning to take hold, and with thousands leaving for America and Australia, depleting the population by 25%. A fascinating album from an extraordinarily difficult time in Irish history for the ordinary poor.
£1750